Book Review: One of Us Is Lying 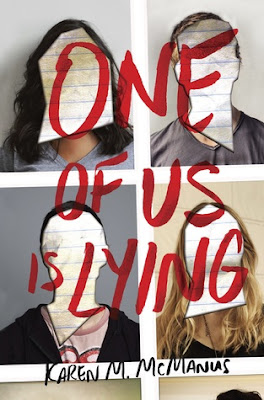 One of Us Is Lying by Karen M. McManus

Pay close attention and you might solve this.
On Monday afternoon, five students at Bayview High walk into detention.
Bronwyn, the brain, is Yale-bound and never breaks a rule.
Addy, the beauty, is the picture-perfect homecoming princess.
Nate, the criminal, is already on probation for dealing.
Cooper, the athlete, is the all-star baseball pitcher.
And Simon, the outcast, is the creator of Bayview High's notorious gossip app.
Only, Simon never makes it out of that classroom. Before the end of detention, Simon's dead. And according to investigators, his death wasn't an accident. On Monday, he died. But on Tuesday, he'd planned to post juicy reveals about all four of his high-profile classmates, which makes all four of them suspects in his murder. Or are they the perfect patsies for a killer who's still on the loose?
Everyone has secrets, right? What really matters is how far you would go to protect them.

Review:
One of Us Is Lying was simply amazing! It got my attention from the very first page and continued to hold it throughout the entire novel. The author, Karen M. McManus, did a great job of hiding who the true killer really was, and only hinted it in at the very end. Usually with books where the point of view rotates between characters, I enjoy one perspective more than the others and look forward to that one in particular. But that didn't happen with One of Us Is Lying; I wanted to know more information about each character equally. This created a very enticing read and I can't wait for more people to read it!