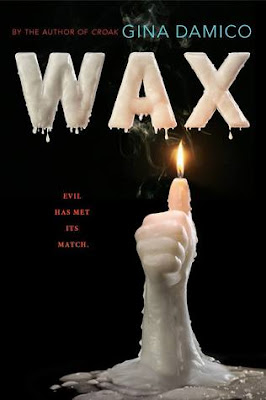 Paraffin, Vermont, is known the world over as home to the Grosholtz Candle Factory. But behind the sunny retail space bursting with overwhelming scents and homemade fudge, seventeen-year-old Poppy Palladino discovers something dark and unsettling: a back room filled with dozens of startlingly life-like wax sculptures, crafted by one very strange old lady. Poppy hightails it home, only to be shocked when one of the figures—a teenage boy who doesn’t seem to know what he is—jumps naked and screaming out of the trunk of her car. She tries to return him to the candle factory, but before she can, a fire destroys the mysterious workshop—and the old woman is nowhere to be seen.
With the help of the wax boy, who answers to the name Dud, Poppy resolves to find out who was behind the fire. But in the course of her investigation, she discovers that things in Paraffin aren’t always as they seem, that the Grosholtz Candle Factory isn’t as pure as its reputation—and that some of the townspeople she’s known her entire life may not be as human as they once were. In fact, they’re starting to look a little . . . waxy. Can Poppy and Dud extinguish the evil that's taking hold of their town before it’s too late?

Review:
Wax by Gina Damico is a comedic thriller about wax sculptures, stardom and immortality. The main character, Poppy, is a strong-willed aspiring actress and singer who is beyond perky and optimistic. Maybe a little TOO perky at times. With The List in hand, she could rule the world... in an organized fashion of course. The other characters, Jill, Dud, Blake, Connor, Jesus and even Greg, have something special about them: little quirks and opinions and actions that make them who they are. Greg has his ice cream jokes, Connor has his cape, and Jesus has his need to take things into his own hands. All of these traits lead to a wildly hilarious and fun novel.
As events passed a few discoveries were predictable, but the way the author announced and dealt with the issues was entirely new to me. Wax is a nice summer or light read that will keep you entertained and laughing until the last page.

Recommended if you like: contemporaries with slight fantasy, high school drama, the movie House of Wax (but this is waaaaaay more of a comedy).