What About Wednesday: 2015 Round-Up

Hey everyone! Seeing as 2015 is coming to an end, we wanted to share our favourite books that came out this year. It was very difficult to pick just 3, let alone order them, so these are numbered randomly. Hope you agree, and if you don't, tell us why! 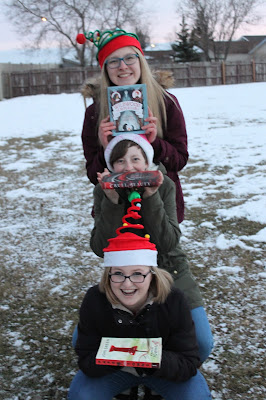 Mari's Picks:
1. All the Bright Places by Jennifer Niven
2. Illuminae by Amie Kauffman, Jay Kristoff
3. A Knight of the Seven Kingdoms by George R.R. Martin

Ola's Picks:
1. Carry On by Rainbow Rowell
2. Simon vs. the Homo Sapiens Agenda by Becky Albertalli
3. Nimona by Noelle Stevenson

Lauren's Picks:
1. Six of Crows by Leigh Bardugo
2. The Heir by Kiera Cass
3. The House by Christina Lauren

Along with this, the Autumn Bookshelf wants to wish you a happy and healthy new year! So all the best for 2016!

- Your Friends at the Autumn Bookshelf
Posted by Unknown at 12:37:00 PM No comments:

Description from Tumblr: When the previous owner of Locker 1224 mysteriously disappeared, you were left holding the only clues. Navigate the school’s social landscape through your decisions and conversations. Solve puzzles and build relationships with new friends and old enemies to work out exactly what happened - and if there’s anything you can do to put it right.

Review: Okay, I know what you're going to say, You guys are a book blog! What're you doing reviewing a game?? Well, this game is basically a choose-your-own-adventure book, with pretty graphics and a digital format.
So this game is amazing. It's lgbtq+ friendly, including the option to choose your gender, pronouns, and look. The plot is clever and well built, with interesting twists and real issues that people deal with, from mental health to bullying.
Don't even get me started on the incredibly loveable characters, who make the game the unique piece it is. Like the enigmatic mascot, Turkeyhawk.
You may want to know though, that other than the first one, the episodes cost $1.99 each. That's not a lot, and the game is really worth it. Like, truly.

Quotable Quotes:
"He said no one was in trouble, because trouble implied that there was an authoritarian power structure at Weasel Heights, and the school practices a non-violent approach to leadership." -Hanniferjane
Optimistically yours,
Ola <3 The Iron King by Julie Kagawa

Description from Goodreads:    Meghan Chase has a secret destiny; one she could never have imagined.   Something has always felt slightly off in Meghan's life, ever since her father disappeared before her eyes when she was six. She has never quite fit in at school or at home.   When a dark stranger begins watching her from afar, and her prankster best friend becomes strangely protective of her, Meghan senses that everything she's known is about to change.   But she could never have guessed the truth - that she is the daughter of a mythical faery king and is a pawn in a deadly war.       Now Meghan will learn just how far she'll go to save someone she cares about, to stop a mysterious evil, no faery creature dare face; and to find love with a young prince who might rather see her dead than let her touch his icy heart.


Review:
The story began as most do: with a character that is unhappy with his/her present life and wants something good to happy. Then it does. It was predictable and nothing special; just another 15 year old high-schooler who had a crush on a guy that would never like her back. Then the plot started rolling and little hints were dropped all over the text. Meghan saw a figure along the forest line, her brother was terrified of a man he kept seeing in his closet. These hints revealed the path and world in which Meghan would travel. They sort of  clued you in to what was happening even before Meghan knew herself.    The reference to A Midsummer Night's Dream took me by surprise. I didn't realize that the play written in 1595 still had such a big influence on stories to this day. The Iron King makes the language of the play and the characters written within it seem more approachable and alive. It' s as if Julie Kagawa connected two separate time periods into one novel.    The characters each seemed to have different motives that were somewhat hidden throughout the novel. They all had a certain role to play and no random, irrelevant characters were thrown into the plot (which I highly appreciated).

Recommended if you like: fantasy, A Midsummer Night's Dream, tales about faeries and goblins, action, a strong female lead

Description from Goodreads:
Eight-year-old Tess is convinced this is the year she will finally meet Santa, and experience "the Christmas magic." She also wishes with all her heart that her best friend's ill father will recover. Tess' faith in the season results in a Christmas Eve so wondrous, so sparkling, readers won't be able to help but feel transformed. Like trimming the tree and "It's a Wonderful Life"; baking cookies and "White Christmas," ON CHRISTMAS EVE is sure to bring new holiday magic to readers' lives.

Review:
Although this book is geared towards younger readers, I still feel like this book is applicable to all ages. Reading this book was uplifting to say the least. Hope and joy have big roles, which make it perfect for Christmas. This book was sparkling with that "Christmas magic." The main character (Tess) is so hopeful about every trial that comes her way. This book unfolds over an entire year (one Christmas to the other). This was a really good choice for telling the story, as it really gets you to care about the various characters. It was heartbreaking to see that interaction between her and Santa towards the end. The way he has to break to her that there is nothing he can do for certain people, that there are some gifts that can't be given, makes me tear up every time. Although it is at times very sad, you still come out with a renewed faith in Christmas. This is why I try to read this every year during the holiday season!

Favorite Quotes:
"Christmas and Santa are all about hope.."
- Ann M. Martin, On Christmas Eve

Simon vs. the Homo Sapiens Agenda

Description from GoodReads: Sixteen-year-old and not-so-openly gay Simon Spier prefers to save his drama for the school musical. But when an email falls into the wrong hands, his secret is at risk of being thrust into the spotlight. Now Simon is actually being blackmailed: if he doesn’t play wingman for class clown Martin, his sexual identity will become everyone’s business. Worse, the privacy of Blue, the pen name of the boy he’s been emailing, will be compromised.
With some messy dynamics emerging in his once tight-knit group of friends, and his email correspondence with Blue growing more flirtatious every day, Simon’s junior year has suddenly gotten all kinds of complicated. Now, change-averse Simon has to find a way to step out of his comfort zone before he’s pushed out—without alienating his friends, compromising himself, or fumbling a shot at happiness with the most confusing, adorable guy he’s never met.

Review: This was the sweetest school drama-esque book I've read since Say You Will! I could literally write an essay about it, but don't worry, I won't.
The suspense is surprisingly thick around who Blue is until the last couple chapter, and it was definitely worth the wait. The book basically laughs at you when you try to guess while gently pushing you in the opposite direction.
Another thing I really liked about this book is how important the friendships are compared to the romantic relationships. A big part of the story is characters realizing what they did wrong and getting forgiveness. Altogether, amazing.

Quotable Quotes:
"White shouldn't be the default anymore than straight should be the default. There shouldn't even be a default."
"Ah. So, what you're trying to say is that we're really creepy."
"He talked about the ocean between people. And how the whole point of everything is to a shore worth swimming to."

What about Wednesday: Winter Edition

Hey everyone!! It's Wednesday, and on Wednesday's we wear pink!! I'm just kidding, of course. This week we decided to have a winter theme in honor of the whiteness that has descended from the sky.

Ola's picks:
1. Dash and Lily's Book of Dares by Rachel Cohn
2. The Lion, the Witch and the Wardrobe by C. S. Lewis
3  Under Wildwood by Colin Meloy

Those are our top choices!! Hope you check them out and enjoy the snowy weather.


Anna and the French Kiss by Stephanie Perkins

Description from Goodreads:
Anna is looking forward to her senior year in Atlanta, where she has a great job, a loyal best friend, and a crush on the verge of becoming more. Which is why she is less than thrilled about being shipped off to boarding school in Paris--until she meets Étienne St. Clair. Smart, charming, beautiful, Étienne has it all...including a serious girlfriend.
But in the City of Light, wishes have a way of coming true. Will a year of romantic near-misses end with their long-awaited French kiss?

Review:
This book is just so cute! From the very first chapter I couldn't get enough. The way Perkins writes is so light and breezy it's a treat to read. Anna is portrayed realistically, as any student would be if they moved to Paris. She is a great protagonist, and the year she spends in Paris is great to follow. A great bonus is that her love interest is the guy that everyone wishes was in their lives. He's so romantic and swoon-worthy! I just wish that Anna would have "discovered" more of Paris, and that she would've seen more of the city. I felt like it was an opportunity wasted, that Perkins had a chance to write an epic "city tour" and didn't take it. However that is really my one complaint. This was simply a solid read through and through. I can't wait until I can get my hands on the next one, and I'm intrigued at how Perkins binds all three books together!

Favorite Quotes: “I mean, really. Who sends their kid to boarding school? It's so Hogwarts. Only mine doesn't have cute boy wizards or magic candy or flying lessons.”
― Stephanie Perkins, Anna and the French Kiss

“I wish for the thing that is best for me.”

Happy Reading,
Mari
Posted by Unknown at 5:00:00 AM No comments: