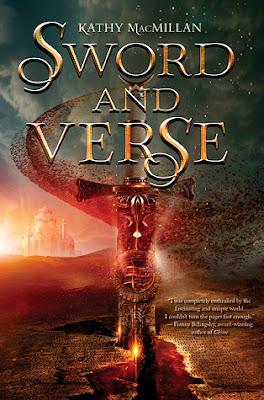 Sword and Verse by Kathy MacMillan

Raisa was just a child when she was sold to work as a slave in the kingdom of Qilara. Despite her young age, her father was teaching her to read and write, grooming her to take his place as a Learned One. In Qilara, the Arnathim, like Raisa, are the lowest class, and literacy is a capital offense. What’s more, only the king, prince, tutor, and tutor-in-training are allowed to learn the very highest order language, the language of the gods. So when the tutor-in-training is executed for teaching slaves this sacred language, and Raisa is selected to replace her, Raisa knows any slipup on her part could mean death.
Keeping her secret is hard enough, but the romance that’s been growing between her and Prince Mati isn’t helping matters. Then Raisa is approached by the Resistance—an underground army of slave rebels—to help liberate Arnath slaves. She wants to free her people, but that would mean aiding a war against Mati. As Raisa struggles with what to do, she discovers a secret that the Qilarites have been hiding for centuries—one that, if uncovered, could bring the kingdom to its knees.

Raisa ke Comun is caught in the midst of a storm. Her loyalties whisk between the Resistance and her beloved, Prince Mati, never fully committing to either.
Her relationship with Mati begins as a mere crush, but quickly, too quickly, strings into a series of hook-ups and heart-to-heart conversations. While dating, you don't really get the feel of their relationship, and separate from one another, Raisa's personality is unknown to me. She seems brave at times, but is mostly shy given her past.
The History of Qilara is well thoughtout. Slaves being the key to the functioning of the society, they play a major role in the book, as Raisa is one herself. I believe Kathy MacMillan has handled this subject well, accurately describing the feelings of the slaves, the relationship between slave and master, and how they were raised.
The plot, however, was my favourite part to read about. In a world where Raisa is one of the four people allowed to read and understand the higher order symbols, she must decode a letter written by her deceased father while battling her emotions for Prince Mati, and secretly helping the Resistance. It's enough to keep your mind occupied and completely interested in the topic. I just couldn't put the book down.

Recommended if you like: fantasy, Inkheart by Cornelia Funke, books set in other eras, slavery (if you like reading about it), forbidden love, overthrowing the government