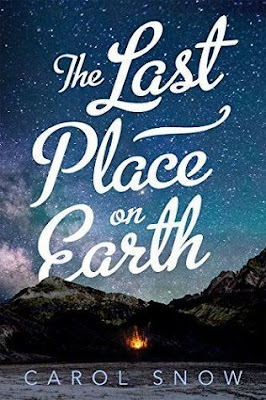 The Last Place On Earth by Carol Snow

Description on Goodreads:
Henry Hawking is sixteen years old, brilliant, funny, and sly--and now he's missing. But no one seems worried except his best friend, Daisy Cruz, who knows that Henry's security-obsessed parents would never leave town without taking proper precautions. And Henry would never go away without saying good-bye.
Daisy considers all the obvious explanations for Henry's disappearance (federal witness protection program, alien abduction) before breaking into Henry's house. In his room, she finds a note that pleads, SAVE ME.
Desperate to find Henry, Daisy follows his trail deep into the California wilderness. What she finds there makes her wonder if she ever knew Henry at all . . . and if the world as she knows it will ever be the same.

Review:
When I picked up The Last Place On Earth at McNally Robinson, I had never heard about it before and that shocked me. Until I realized it was a contemporary novel. Contemporary novels are not my favourite, I prefer thrillers and fantasy, but this one had more of an apocalyptic feel to it.
Even with the mysterious twist, the book had dull characters, a semi-dull plot and a definitely dull ending. The style of writing was quite boring and sounded almost robotic when I read it in my head.
A few scenes did stand out from the murkiness though. Like when Daisy found out what was actually going on and when she plays Truth or Dare. These were quite interesting because I couldn't figure out what was going to happen next; they weren't predictable. Also the second scene involved Kyle, the bad boy surviver with a soft spot for his family. He was charming, kind (only to those he liked) and kind of peculiar. But he had a good heart and knew what he wanted out of life.
I didn't enjoy this read that much, but that doesn't mean others shouldn't try it.

Recommended if you like: mysteries, friendship, small romances,  weird twists on contemporary novels

Email ThisBlogThis!Share to TwitterShare to FacebookShare to Pinterest
Labels: Carol Snow, friendship, school, survival, the Last Place On Earth, YA