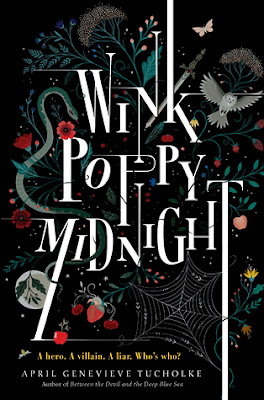 Description on Goodreads:
Every story needs a hero.    Every story needs a villain.    Every story needs a secret.    Wink is the odd, mysterious neighbour girl, wild red hair and freckles. Poppy is the blond bully and the beautiful, manipulative high school queen bee. Midnight is the sweet, uncertain boy caught between them. Wink. Poppy. Midnight. Two girls. One boy. Three voices that burst onto the page in short, sharp, bewitching chapters, and spiral swiftly and inexorably toward something terrible or tricky or tremendous.    What really happened?    Someone knows.    Someone is lying.

With every paragraph, page and chapter that I read, I couldn't help but think what the heck? Everything each character thought and did, was creepy in some way. Like when Midnight waits and is fine with Poppy climbing into his room at night even though he's trying to get over her. He was supposed to be with Wink! Was he just leading her on?
And then there were the Orphans, aka Wink's siblings. There were so many of them and they didn't have distinguished personalities. They acted like a mass of small, childish innocence that didn't play much of a role at all. Poppy on the other hand was the most complex and strangely interesting character I've ever met. She could control everyone as if they were puppets and she the puppy master. She could get anything and anyone she wanted (*coughALMOSTcough*), and yet that was never good enough for her. She just wanted her parents to consider her mature and no longer their 'little girl', and to be viewed as an equal.
One part of the novel I really did enjoy though, was the ending. You can tell that much thought and detail was put into creating how the conclusion came to a close. The back and forth plot, the Is she alive? Is she dead? Is she a ghost?, kind of threw me a bit, but I'd be open to read more about something like that.