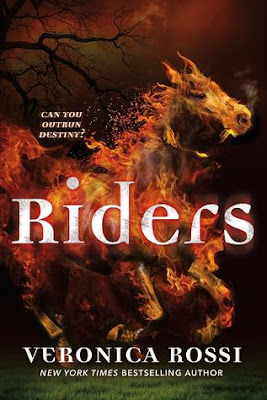 Description on Goodreads:
For eighteen-year-old Gideon Blake, nothing but death can keep him from achieving his goal of becoming a U.S. Army Ranger. As it turns out, it does.

Recovering from the accident that most definitely killed him, Gideon finds himself with strange new powers and a bizarre cuff he can't remove. His death has brought to life his real destiny. He has become War, one of the legendary four horsemen of the apocalypse.

Over the coming weeks, he and the other horsemen--Conquest, Famine, and Death--are brought together by a beautiful but frustratingly secretive girl to help save humanity from an ancient evil on the emergence.

Now--bound, bloodied, and drugged--Gideon is interrogated by the authorities about his role in a battle that has become an international incident. If he stands any chance of saving his friends and the girl he's fallen for--not to mention all of humankind--he needs to convince the skeptical government officials the world is in imminent danger.

But will anyone believe him?

Review:
Veronica Rossi has outdone herself with this timeless retelling of the classic four horsemen legend. The novel was oddly staged, letting you know right from the start that they failed, but that didn't stop me from diving right in.
The idea that each horseman had to die before becoming a horseman, and that the way they die is related to their powers, was extremely cool. It gave me a sense of everything tying together and that each of them was an equal part of a well oiled machine. The exception was Daryn of course. She herself was a part of this 'machine' even though she was more of the mastermind behind everything. She was a complex character that knew more than she let on, and was strong even when she didn't have to be.
What I really enjoyed about this book was the constant plot twists and the ever-rolling action. Even the way everyone met was action packed! I mean, seriously, meeting another horseman at an audition? So creative, I would never have thought of that. The adventure, continuous threat of danger and non-stop hilarity kept me on the edge of my seat, and I can not wait to read the fabulous sequel when it releases.

Review: This book was great! It begun slowly, but eerily and it introduced the characters in a way that I haven't seen in a while, maybe ever.
The plot was a little confusing as the four horsemen of the apocalypse were evil in the original stories, so why were they good here? My favourite theory is that they were sent by the devil, but at this point it's unclear.
There's a lot of masculinity. Like a lot. You may not notice it the first time you read it, or maybe you do. Female characters are either mysterious and difficult, or evil. Even the names are really masculine! But the horsemen are nice, and their back stories tie in well to their powers and personalities. I liked them.
If you skip over that, the fight and action scenes are confusing and difficult to follow (but that might just be me). The whole ending bit? It's been months since I read it, and I'm still confused.
Altogether it's pretty good, and I'm looking forward to where they take it next.