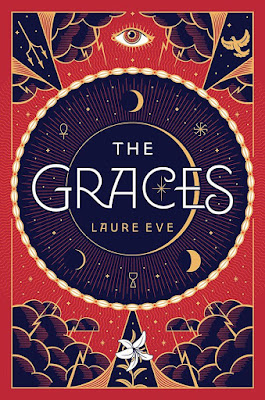 The Graces by Laure Eve

In The Graces, the first rule of witchcraft states that if you want something badly enough, you can get it . . . no matter who has to pay.
Everyone loves the Graces. Fenrin, Thalia, and Summer Grace are captivating, wealthy, and glamorous. They’ve managed to cast a spell over not just their high school but also their entire town—and they’re rumored to have powerful connections all over the world. If you’re not in love with one of them, you want to be them. Especially River: the loner, new girl at school. She’s different from her peers, who both revere and fear the Grace family. She wants to be a Grace more than anything. And what the Graces don’t know is that River’s presence in town is no accident.
This fabulously addictive fantasy combines sophisticated and haunting prose with a gut-punching twist that readers will be dying to discuss. Perfect for fans of We Were Liars as well as nostalgic classics like Buffy the Vampire Slayer and the 1996 movie The Craft, The Graces marks the beginning of a new wave of teen witches.

Review:
How do I even begin to explain my opinion? Well, I guess, for starters, River is just like the others. She's head-over-heels in love with the Graces and can't help but stalk them. She thinks she's different, that she's special, but she does what all the others do: follow the Graces around, believe they walk on air, and go along with what they say. She pretends to be a dissimilar person when she's with them, and even renamed herself River. ( River's not her real official first name!)
River has a mysterious and fascinating back story. She avoids talking about herself and prefers to act like a mirror, deflecting all personal questions and asking questions of her own instead. She doesn't want to talk about, or even think about, the past that haunts her, and is dead-set on fixing her mistakes. It's not until the end that we find out just how huge her mistakes are.
What a plot twist, though. It came totally out of nowhere, okay, not entirely. But after it was revealed, I couldn't help but notice all the little clues I should have seen earlier. Random scenes that didn't really make sense to the plot at the time, but completely tied in later. These little details, no matter how seemingly innocent, gave insight to what was to come, and I wish, WISH, I paid more attention before. It seems careless now that I didn't.
Are the Graces witches? That's the real question. And after finishing the novel, I am still left pondering the answer. What do you think? Read the book and comment your answer.

P.S. I didn't notice until Ola pointed it out, but the oldest daughter is named Thalia Grace, as in Percy Jackson's Thalia Grace. The Daughter of Zeus Thalia has more in common with Summer though.