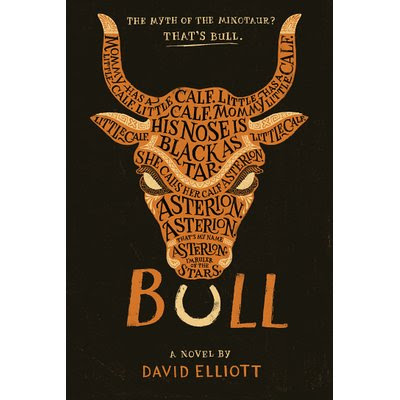 Description on Goodreads:
SEE THE STORY OF THESEUS AND THE MINOTAUR
IN A WHOLE NEW LIGHT

Minos thought he could
Pull a fast one
On me,
Poseidon!
God of the Sea!
But I’m the last one
On whom you
Should try such a thing.
The nerve of that guy.
The balls. The audacity.
I AM THE OCEAN!
I got capacity!
Depths! Darkness! Delphic power!
So his sweet little plan
Went big-time sour
And his wife had a son
Born with horns and a muzzle
Who ended up
In an underground puzzle.
What is it with you mortals?
You just can’t seem to learn:
If you play with fire, babies,
You’re gonna get burned.

Much like Lin-Manuel Miranda did in Hamilton, the New York Times best-selling author David Elliott turns a classic on its head in form and approach, updating the timeless story of Theseus and the Minotaur for a new generation. A rough, rowdy, and darkly comedic young adult retelling in verse, Bull will have readers reevaluating one of mythology's most infamous monsters.

Review:
I'm not used to reading poetry, I prefer YA fantasy/thriller novels, but I wanted to read Bull based on the fact that it's greek mythology. AND of course, it has a lovely cover. I mean, just look at it! The bull's head is sketched beautifully with emphasis on the bright oval eyes and the midnight black words. Such a masterpiece.
Now on to the book itself... Poseidon was absolutely hilarious; and I don't mean the Laughs-In-Head-But-Smirking funny, I mean the So-Funny-I-Have-To-Make-Everyone-Around-Me-Read-This-Right-Now funny. I couldn't put it down. The way Poseidon explained everything and could read your mind ( how he calls you out on thinking he should sound more old fashioned), it was extremely entertaining.
The rest of the characters felt like just that: characters. It felt like Poseidon was the narrator, the main pulling all the strings, and could decide the fate of all the mortals at a flick of his wrist. This was actually more exciting than it probably sounds. It seemed like I was with a storyteller and I couldn't help but be in awe of every twist and turn of the plot. I was the small obedient child listening intently while my elder told me of the old ways. It was fascinating!
Anyway, the story itself was intriguing. Each character's point of view really added to how the tale was perceived. By showing how Minos felt, I was easily able to understand why he acted the way he did, and the same goes for Pasiphae, Asterion, Ariadne, and Poseidon.
In this case, the story was indeed incredibly short but that's all I needed. If it was any longer, if the author had tried to expand a scene any further, it might've felt boring at some point. Overall, I would definitely recommend Bull to anyone that likes greek mythology, the story of the Minotaur, or comedic poetry.

Favourite Quotes (When reading them, don't forget to rhyme it in your head, and the capitals start a new line in the poem!):

Recommended if you like: greek mythology, modernly-written poetry, comedies, poetry in general, short-but-sweet stories, the story of the Minotaur