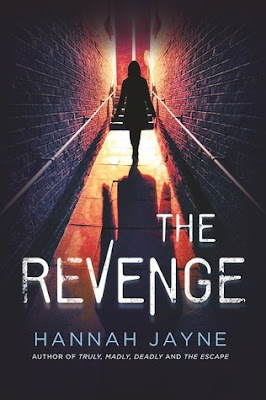 The Revenge by Hannah Jayne

Tony just wanted a little revenge when he posted his ex’s location online. He never meant to lead a predator to her doorstep…
After Hope breaks up with Tony and embarrasses him at school, he's devastated. In a moment of revenge, Tony makes the location on her phone public. But a week later, when Hope calls Tony and begs him to stop the prank, he hears a shriek and a car door slamming. Then the call is dropped.
When Hope isn't back at school the next day, Tony realizes that he may have put Hope's life in danger. Can he trace Hope's movements and save her before it's too late?

Review:
The Revenge is truly a great book. With its easy-to-read format, it was hard to put down and I ended up finishing it in a matter of hours! The characters are very relatable and very distinct. They each have their own unique personalities and motives that drive them to act. The only complaint I have is over how the novel ends. The Revenge has about three different intertwined plot lines and only one of them is—in my opinion—completely solved. It would've been nice to find out everything else, and for the author to tie up the rest of the loose-ends, or at least so we don't have to make so many assumptions. Other than that, I really love this book and would recommend it to all thriller lovers.

Recommended if you like: thrillers, kidnapping, manipulation, reading about the downfalls of bad parenting