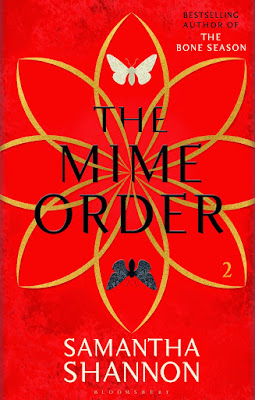 The Mime Order by Samantha Shannon

Description from GoodReads:
Paige Mahoney has escaped the brutal prison camp of Sheol I, but her problems have only just begun: many of the survivors are missing and she is the most wanted person in London...   As Scion turns its all-seeing eye on the dreamwalker, the mime-lords and mime-queens of the city's gangs are invited to a rare meeting of the Unnatural Assembly. Jaxon Hall and his Seven Seals prepare to take centre stage, but there are bitter fault lines running through the clairvoyant community and dark secrets around every corner. Then the Rephaim begin crawling out from the shadows. But where is Warden? Paige must keep moving, from Seven Dials to Grub Street to the secret catacombs of Camden, until the fate of the underworld can be decided.

Review: I'm going to start off by saying that I loved the Bone Season, and the cliffhanger ending tore my heart out. This book haphazardly stuffed my heart back. It was probably because the whole suspicious Scion-Rephaite connection was blown wide open, and every motive was painstakingly explained. Not to mention, the whole 'trying to survive'/'learning about my powers' was pretty much over, which was what added the thrills.

Although I took a five month break, I'm glad I picked it back up again for the ending. Not being one for huge written fight scenes, the 'Rose Ring' fight was surprisingly good. The whole thing was very Hunger Games-esque, but better. (Set the walking in sequence to "Too Slow" by Johnny Klimek)

The Warden, was just there. As always. There only when Paige needed him. The first book rounded him out a little, but the Mime Order flattened him out again.

Altogether, there were only about five chapters that were worth it.

Quotable Quotes:
"Words are everything. Words give wings to those who have been stamped upon, broken beyond all hopes of repair."
"Madness is a matter of perspective, little dreamer." - Jaxon Hall

Read this if you liked: Mockingjay, the Bone Season, a Great and Terrible Beauty, Divergent, etc.