Book Review: Down with the Shine 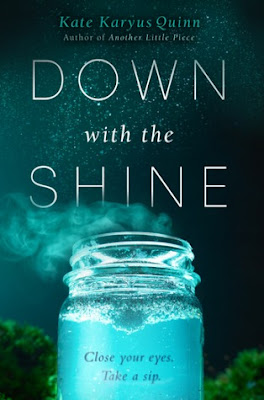 Down with the Shine by Kate Karyus Quinn

Lennie always thought her uncles’ “important family legacy” was good old-fashioned bootlegging. Then she takes some of her uncles’ moonshine to Michaela Gordon’s annual house party, and finds out just how wrong she was.
At the party, Lennie has everyone make a wish before drinking the shine—it’s tradition. She toasts to wishes for bat wings, for balls of steel, for the party to go on forever. Lennie even makes a wish of her own: to bring back her best friend, Dylan, who was murdered six months ago.
The next morning gives Lennie a whole new understanding of the phrase be careful what you wish for—or in her case, be careful what wishes you grant. Because all those wishes Lennie raised a jar of shine to last night? They came true. Most of them came out bad. And once granted, a wish can’t be unmade…

Review:
To start things off, this book was predictable up until the plot twist that caught me totally off guard. I was just following the chase, and then BOOM. I had to ask myself what happened. But I loved the ending anyway.
The way the characters were written was slightly odd, especially the three uncles. It was like they spoke in unison, and were all basically the same person. But how could you not love them? They were hilarious, supportive, brave and caring at the best of times.
Then there was Smith. Sigh. I love the way he was connected to each character. He's Lennie's ex-Friend, Dylan's brother, and knows everyone from school. He's a great side character for the novel and could really have a novella made all about him. Also, I was fond of the idea that Smith would never apologize.
All together, Down with the Shine was a wonderful read.

Recommended if you like: magic, genie, romance, fantasy, fairytales, the story of King Midas.