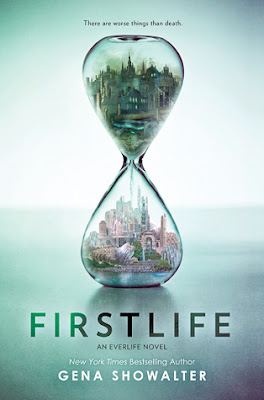 Tenley “Ten” Lockwood is an average seventeen-year-old girl…who has spent the past thirteen months locked inside the Prynne Asylum. The reason? Not her obsession with numbers, but her refusal to let her parents choose where she’ll live—after she dies.
There is an eternal truth most of the world has come to accept: Firstlife is merely a dress rehearsal, and real life begins after death.

In the Everlife, two realms are in power: Troika and Myriad, longtime enemies and deadly rivals. Both will do anything to recruit Ten, including sending their top Laborers to lure her to their side. Soon, Ten finds herself on the run, caught in a wild tug-of-war between the two realms who will do anything to win the right to her soul. Who can she trust? And what if the realm she’s drawn to isn’t home to the boy she’s falling for? She just has to stay alive long enough to make a decision…


Review:
Through the eyes of Tenley Lockwood, we visit a world where the life you live doesn't matter. It's your Secondlife that counts. Reading about someone who is stuck in a whack shack is soooooooo entertaining. You learn their daily routine, the weird new hobbies they have, and how they view life. Tenley's story is different from the rest. She stays in there by choice. Well, not totally. Her parents did force her to go there in the beginning, but she could have left at any moment. All she had to do was sign with Myriad, basically sell her soul, then she could do whatever she wanted with her Firstlife. Of course, there are always complications, but that's what makes this novel so interesting.
My favourite part of the entire book (that's right, I narrowed it down), was the fact that we were always missing a piece of the puzzle; we could never see the full picture. From the very beginning (yes I mean the emails/texts between Archer and General Levi, and Killian and General Pearl), we knew of the intricate unknown relationship between Killian and Archer. This bold background history only intensifies our wanting to know what happened. This great move played by Gena Showalter holds our attention until the last possible moment. And it's not just their relationship that's covered up; we don't know what's happening with Tenley's parents (why they act the way they do) or why Myriad and Troika want her so bad. Why go through all the trouble to sign her? There are literally millions of people out there.
And then there's the creepy song Tenley mutters at the Prynne Asylum. Ten's tears fall, and I call. Nine hundred trees, but only one is for me. Eight times eight times eight they fly, whatever you do, don't stay dry. Seven ladies dancing, ignore their sweet romancing. Six seconds to hide, up, up, and you'll survive. Five times four times three, and that is where he'll be. Two I'll save, I'll be brave, brave, brave. The one I adore, I'll come back for. Like, HELLO, there's the eerie, stereotypical psychopath we were looking for. At first I thought it was just a random song to fill the silence, but oh boy was that a nice plot twist.
Everyone has a thing. You know what I mean? Everyone has that one habit like tapping their shoes, or humming to themselves. Tenley's thing is numbers. She counts everything to pass time. She counts days, hours, footsteps, turns. She counts the number of times she hears certain noises. This is a habit I relate with, and it's the first time someone has shared it with me. These numbers are what keep her sane in the asylum, and develop into her personality. TENley even has a nickname after it, how cool is that?
Now. Let's take a moment to think about Killian. Siggggh. I fell in love with his bad boy attitude from the start, how could you not? He had sly remarks, and the whole bad-ass-on-the-outside-kind-hearted-on-the-inside thing going for him. He wasn't afraid to take what he wanted and mouth off to his superiors. He gives off the 'player' vibe but wins you over by saying lines like, "  Just because I haven't offered it (forever) doesn't mean I won't sometime in the future. I'll give the right girl everything". That's swoon-worthy right there. Archer on the other hand, is the good boy. He understands when you need space, and will let you do whatever you want because he loves you so much. He's pure, says what he thinks and is against anything distinctly wrong. He's more of the protective older brother than the passionate lover type.
There are so many things I can obsessively rant about, but I want there to be some honest-to-God surprises in this novel. Gena Showalter has truly outdone herself this time, which mirrors what I felt about the White Rabbit Chronicles, another marvellous series of hers. In short (and I'm going to do this the Tenley way):
3- the number of heroic, spontaneous, and witty characters that'll risk it all to achieve their goals.
467- the number of pages it takes to reach the nail-biting conclusion.
0- the number of novels I've read that are even remotely similar to this one.


Favourite Quotes (so basically all the quotes I like) :

Recommended if you like: Gena Showalter's White Rabbit Chronicles, if you want to know a perspective of what could happen after death, prisons, war, many bloody battles, smooth banter, good vs. evil (and not knowing which is which), self defence, strong female heroines