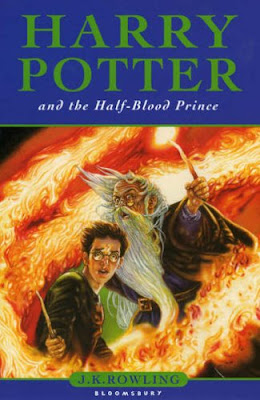 Harry Potter and the Half-blood Prince by J. K. Rowling

It is Harry Potter's sixth year at Hogwarts School of Witchcraft and Wizardry. As Voldemort's sinister forces amass and a spirit of gloom and fear sweeps the land, it becomes more and more clear to Harry that he will soon have to confront his destiny. But is he up to the challenges ahead of him?

In her darkest and most breathtaking adventure yet, J.K. Rowling skilfully begins to unravel the complex web she has woven, as we discover more of the truth about Harry, Dumbledore, Snape and, of course, He Who Must Not Be Named ...

Review:
As with all the other Harry Potter novels, Harry Potter and the Half-blood Prince is filled with magic, mystery and mischief. This book is my favourite, if I had to pick one, because it still takes place in Hogwarts, but has a major part of the overall series plot. By this I mean, we finally get to know how to defeat Voldemort, and we get to understand how he's survived for so long without a body. J. K. Rowling's ideas are pure genius and have a way of making you feel like every small detail matters in the end.
The Half-blood Prince is the last novel in the series that has scenes where Ron and Harry goof off like they used to. They fool around in class, can still laugh and make jokes. It's also the last with quidditch, a sport I've come to love over the years. Sirius-ly (sorry I had to), if we had quidditch leagues or learned how to play quidditch in school, I'd definitely be in on that. Talk about a dangerous and nerve-racking game.
Half-blood Prince is the end to Harry, Ron and Hermione's childish ways. It's depressing, and sad, but true.

Recommended if you like: Fantasy, any of the other Harry Potter books, witchcraft, a world hidden within our own, quidditch, suspense, adventure, wizarding school drama, war, taking life into your own hands.