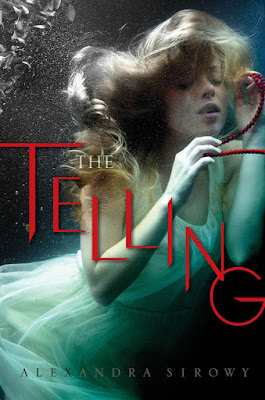 The Telling by Alexandra Sirowy

Lana used to know what was real.
That was before when her life was small and quiet.
Her golden step-brother, Ben, was alive, she could only dream about bonfiring with the populars, their wooded island home was idyllic, she could tell the truth from lies, and Ben’s childhood stories were firmly in her imagination.
Then came after.
After has Lana boldly kissing her crush, jumping into the water from too high up, and living with nerve and mischief. But after also has horrors, deaths that only make sense in fairy tales, and terrors from a past Lana thought long forgotten: Love, blood, and murder.

Review:
This isn't a spoiler, no matter what you may think, but I am a committed member in the Alive-until-literal-body-is-proven-dead club. As soon as Ben's death was described, and I learned that he fell off a cliff into the water below, I believed that he was alive. I've watched waaaay too many of my favourite characters on TV shows die then come back to life. There's always a loop hole or a small detail that someone missed, that proves the person isn't dead. So for the majority of THE TELLING, I searched for Ben. But what happens, I will not say.
Ben and Lana share a complex relationship, considering their horrible childhood ( before meeting each other). The stories Ben tells Lana bond them and make them closer siblings. These stories, although quite morbid, are unique and really interesting. Beakless black birds and  rosary peas, an odd combination. Also in these stories, Lana and Ben are the common protagonist, always killing the villain the same way the villain killed its victims. Lana the Brave is outgoing and fearless, unlike her current realistic self.
Lana's relationship with Josh Parker is short and not really there. Of course they're good friends, but if you're looking for a strong romance, this is not the book for you. They act nervous and semi-casual around each other, but you can't feel their connection. It's as if she doesn't like him and is awkward around him just because he's a guy. In short: not very lovely dovey.
The mystery was kept alive during the entirety of the novel, and made me switch between many suspects. I couldn't figure out who had the right motive and how each murder was pulled off. Why did Maggie hide where she did? Why does everyone suspect it was Fitzgerald Moore? And what did any of this have to do with Lana and Ben?
By the end of this thriller, Lana finds out the true nature of many of the people around her. Many are not who they seem to be, and each of these discoveries is even more captivating than the one before.