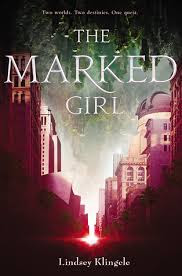 The Marked Girl by Lindsey Klingele

Once upon a time, in a land far, far away (Los Angeles)…

When Cedric, crowned prince of Caelum, and his fellow royal friends (including his betrothed, Kat) find themselves stranded in modern-day L.A. via a magical portal and an evil traitor named Malquin, all they want to do is get home to Caelum—soon. Then they meet Liv, a filmmaker foster girl who just wants to get out of the system and on with her life. As she and Cedric bond, they’ll discover that she’s more connected to his world than they ever could’ve imagined…and that finding home is no easy task…

The Marked Girl has been on my TBR list since December, and I'm so glad I finally had a chance to read it. I don't know exactly what enticed me so much, whether it had been the cover or the plot, but the novel is special, the dimensions especially.
The way the different dimensions are written and created is reason enough to read this thrilling novel. I mean, who would've thought to include the fact that earthquakes occur when a portal is used? It's genius! Anyway, these portals or tears between worlds add a sort of mysterious quality to the book, and make you want to ask oh so many questions. How do these portals exist and why? How do scrolls effect the portals?
Cedric, Merek and Kat have an intricate relationship that is a mix between a dictatorship and just a group of friends. Kat listens to Cedric with soldier-like loyalty and never disagrees with his decisions.  I understand her not wanting to piss off the prince, but it gets to be too much sometimes.She seems like a goody-two-shoes who doesn't want to upset her fiancé. Did I mention their engaged? Since birth. Which was a nice complexity to Liv ad Cedric's friendship.  Merek on the other hand does everything in his power to anger Cedric. Whether it be a random snarky comment or taking action and doing something Cedric told him not to do. This odd friendship between Merek, Kat and Cedric takes on a whole new challenge when Liv joins the party. And it is a change that was well needed.
Overall The Marked Girl is a great novel to read if you are looking for something with overlapping plot and complex relationships.