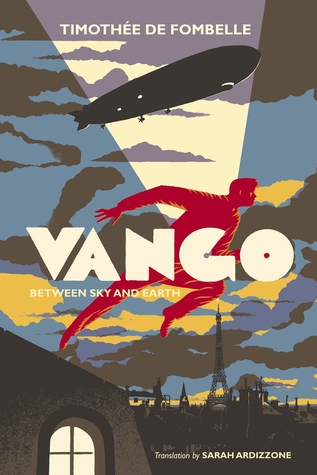 Vango: Between Sky and Earth by Timothée de Fombelle

Description from Goodreads:  A breathless adventure from international award winner Timothée de Fombelle charts a desperate search for identity across the vast expanses of Europe.
In a world between wars, a young man on the cusp of taking priestly vows is suddenly made a fugitive. Fleeing the accusations of police who blame him for a murder, as well as more sinister forces with darker intentions, Vango attempts to trace the secrets of his shrouded past and prove his innocence before all is lost. As he crisscrosses the continent via train, boat, and even the Graf Zeppelin airship, his adventures take him from Parisian rooftops to Mediterranean islands to Scottish forests. A mysterious, unforgettable, and romantic protagonist, Vango tells a thrilling story sure to captivate lovers of daring escapades and subversive heroes.

Review: This book is a piece of art, and that only partially includes the cover. The characters are beautifully intertwined, and the way new clues are introduced make you discovered them.
Vango is a paranoid almost-priest being chased by multiple people and countries. When have you ever heard a plot summary like that? Throughout the novel, the hunt is told from many, many interesting perspectives, and across many, many different countries. Oh boy, don't get me started on the well-crafted romance. A better love story than Romeo and Juliet (which honestly, is pretty easy to do). Vango and Ethel are madly in love but haven't seen each other since the summer they spent on the Graf Zeppelin. Ah, it's amazing.
I was hooked from the very first, very confusing chapter, but the end left me wanting more from this novel. Not in an incomplete storytelling way, but in a "There better be a second book!!" way.
The only issue with this book is that it's a bit slow sometimes. If you want non-stop, adrenaline high action from every scene, this is not your book. It's more of a slow thriller, and it's worth it, but it isn't high speed.

Quotable Quotes:
-"'I'm claustrophobic.''Nice to meet you! I'm paranoid.'"
-"'The shot has gone under my rib, Boulard my boy, so it must have been the shortest one who fired.' Even his final sigh was a police investigation."
-"Perhaps it was because of his wife that Pippo the farmer dreamt of becoming a sailor. There are certain people on this earth who make you want to sail very far away, and above all for a very long time."

Read if You Liked: the 1930s in Europe, art, Paris, there are no books that I've read like this, the Leviathan (?)